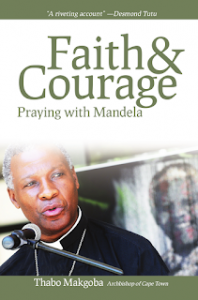 The US edition of Archbishop Thabo Makgoba’s biographical memoir, Faith & Courage: Praying with Mandela, has won an American book award.The publishers, Forward Movement, have announced that the book has been recognised as among the year’s best Christian books in the US. It won a bronze medal in the category “biography/memoir” of the Illumination Book Awards.

Gold medals went to books devoted to American subjects, one to Child of Grace: A Death Row Story, by Dr. Chris Brown, and the other to Praying On Empty: A Female Pastor’s Story, by Marjorie Weiss. A silver medal went to A Walking Disaster: What Surviving Katrina and Cancer Taught Me About Faith and Resilience, by Jamie Aten.

Faith & Courage was among five published by Forward Movement which won awards in categories including theology, Bible study, ministry and mission and devotional.

Responding to the award, the Archbishop said: “I hope the book shows that reconciliation is possible in the most difficult of situations and will point to the hope and the grace that is in store for us as Anglicans, as Christians, as people of God, when we work at forgiveness and reconciliation within the Communion.”

The book was published in South Africa in 2017. The American and British editions, published late last year, include an additional chapter on reconciliation in society and in the Anglican Communion.

The South African edition is not available electronically but the paperback is available on loot.co.za.

The Forward Movement edition is available on Kindle in and in hardback and paperback here on Amazon.com.

The UK edition, published by SPCK, is available on Kindle and in hardback and paperback on Amazon.co.uk.